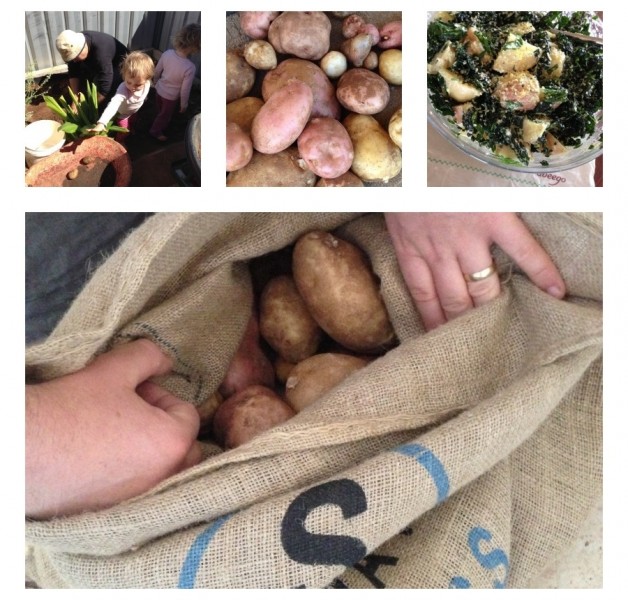 A catch up with the Breakfast Rave team always calls for a dish crafted of home grown. So an overdue patch of potatoes to be dug and an overflowing kale plant from the Mandala veggie patch became a potato salad to share over a planning session for the next Rave in April. Perfect!
The coolest thing is these potatoes originated from Sid, our local passionate potato grower at the Barossa Farmers Market. Sid is a total trooper. We won’t guess his age but he hand plants, grows, digs and sells his potatoes himself, into the tonnes every year. He swears this physical activity and simple healthy eating keeps him young. Buy some potatoes on a Saturday morning and a clever joke follows the phrase “Now, before you go…”. He’ll also insist on the correct choice of potato for your cooking purpose so you don’t ruin his hard work. He kind of sounds like us, just swap the potatoes for coffee beans!
So back to our own digging; sprouted shoots from Sids potatoes from last season (there’s the sign of no sprays! that’a boy Sid!) ended up in a corner of our garden that loves a conversion from scraps to food… And ‘whalla’, potatoes to share and some good hand in the earth time for Paul and the girls! A small green coffee bean sack has also found it’s moment of conversion; potato storage until the next haul!