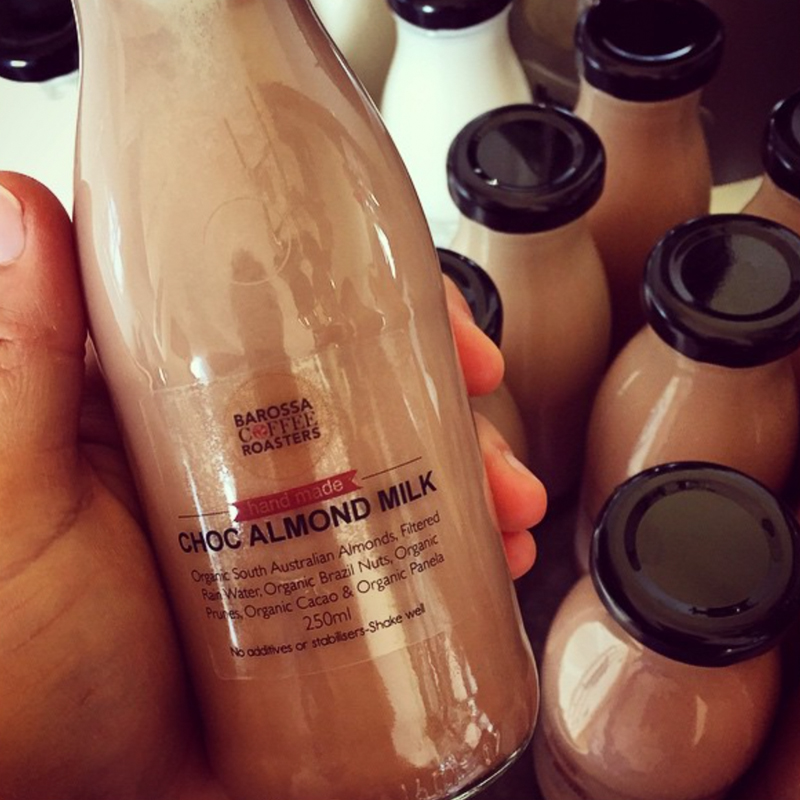 It’s been a few weeks now since the Full Moon Farmers Market, an entirely plant based, whole food gathering lovingly created by our friend Cherie of Scullery Made Tea. Certainly one of the most unique and beautiful experiences we have been a part of, and after eight Breakfast Raves that’s saying something! The ultimate philosophy of kindness was the go of the night, and that meant only plants were pulled from the earth not the lives of those who graze on it. Perhaps a tough concept for some to swallow but nothing a Super Full Moon, an open mind and a little education sharing couldn’t fix. The evening opened up a space; as did the cloud cover when the Super Full Moon rose above our heads. Check out the Facebook page here for some beautiful pics of the night.

On our plant based blackboard offering was the usual organic coffee, chai and hot chocolate and the not so usual plant based organic milks; our own homemade Organic Almond Milk and Soy. We didn’t really know how the no cows milk thing would go down but we received the most amazingly positive response; seriously positive response, which is why we’re sharing this recipe…Hooray for options!
We’ve been making Almond Milk for about a year now for our lovely little daughter Lucy, who we took off cow’s milk to try to clear a 9 month lingering coughâ€¦ and heres where the Hero part steps in. It cleared. This is the very short version of a very long story but we’ve been making Almond Milk ever since, buying boxes of Almonds from the farm gate of an Organic Almond Grower up the road (We know. We love this bit too!).
As for Almond Milk in coffee; that took a little longer to come about. We tried Almond Milk in coffee before on holidays in Byron. Loved the concept, couldn’t quite convince the palate, but a funny thing happened as we continued eating cleanly; a palate shift began amongst other shifts, and for one of us Almond Milk has become the answer to a dairy free cup. A happy accident of adding a handful of Brazil Nuts to the mix was just what the milk needed to remove the edgy greenness of the Almond character and create a creaminess that holds the milk together and stops it splitting. The return of the milky morning latte Hero!
Oh! There’s another reason that Almond Milk is our Hero; and by our we mean the whole collective our as in us all. This lovely little nut is among the most nutritious of the nut kingdom. Rich in fibre, vitamins such as vitamin E, minerals such as manganese, potassium, calcium, iron, magnesium, zinc and selenium, as well as monounsaturated fatty acids. Ah hem Hero!

Soak the Almonds and Brazil Nuts in water overnight. Drain the water away and place nuts in a high speed blender along with dates, salt and 6 cups of rainwater. Blend on high for 20-30 seconds depending on how hard core the blender is. We use a thermomix and blend for about 20 seconds.
Set up your nut milk bag over a large deep container and strain the nut slurry through the bag; squeeze the milk out (no need to squeeze too much at this point because you’re about to go again). Repeat the blending process with a further 6 cups of water and the nut meal. Repeat the straining process and this time squeeze the nut bag as much as possible to extract all the milk leaving a damp nut meal pulp.
Pour the milk into glass bottles and store in the fridge. The Almond Milk will keep for around four days.
Makes 2 litres.

To texture milk for coffee, only take the Almond Milk to Soy Milk temperature; around 58 degrees. This will help to reduce the split. The fresher the milk the less it will split in your coffee; on day three to four we find it may start to split.

This is a super rich and creamy mix based on texturing for coffee. If you use the milk for the kids or in your cup of tea or cooking then you can almost halve the amount of almonds. Have a play around.
Lately we’ve been going a third round in the blender and saving the third litre of milk for baking or a creamy pasta sauce. Hero!